A long time ago, deep in the thick magical jungles that protect the village of Kalaripuram, a legendary and wise Guru discovered how to channel this magic through the ancient martial art of Kalaripayattu. He passed on these secrets to his two sons, Guru Palan & Guru Veta. Kalari kids follow the lives of the two Gurus, their contrasting ideologies & their students. While Guru Palan believes in bringing the best out of his students with a more flexible and out of the box method of teaching, Guru Veta does the same in military style training. Guru Palan's pure heart gives him the power to neutralize Guru Palan's attempts at misusing the magical powers their father passed on to them. Both the Gurus have their favourite students, Beenu in Guru Palan's protege who he believes will one day master the art of Kalari and maybe even the jungle's magical powers.Outside of the gurukul, the kids lead the life of regular kids whether it's playing pranks on each other, studying or playing video games. 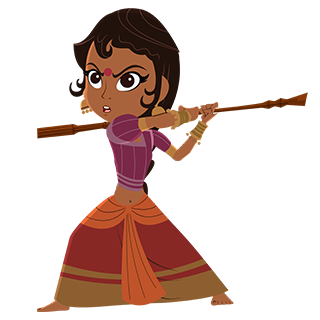 Meena, Guru Palan's daughter is a charming girl who gets her love for the art of Kalari from her father and a natural at it. She also learns Mohiniyattam from a visiting teacher at the gurukul. She is smart, inquisitive and eager to learn the traditions of Kerala. She is well read and knows a lot about the magical jungles around Kalaripuram.

Her obsession with learning about Kerala and its traditions often leads to quarrels with Beenu and Shyam. She is always excited about ceremonies and festivals and drags her friends to visit temples and landmarks for various events. She also secretly adores Beenu and is biased towards him. 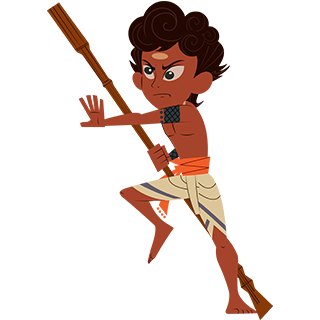 Beenu is the protagonist of the show and a compassionate one at that. He is devoted towards mastering the art of Kalaripayattu but his overconfidence often gets the better of him. He is the most mature of all the students of the gurukul. He is a creative inventor and comes up with unconventional uses for conventional weapons. He is a natural leader and friend to his peers who look up to him.

While he believes in winning fair and square, cheating enrages him. He can also be a little stubborn. While he has a fascination for mystical things, he is impatient in his quest to learn or discover them.

Beenu loves music and is an excellent table player. He has a good sense of humour and often has a witty response to throw his opponents off their game. While he is confident on the field, he is shy when he has to strike up a conversation with girls and like any other teenager, fears goofing up while talking to them especially Lekha. 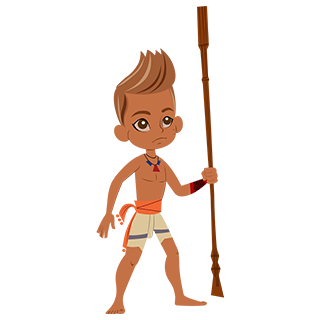 A rich kid from a spoiled urban life, Shyam has a hard time putting his cellphone down long enough to pick up a fighting stick. But when he does, he's a quick learner and adept at Kalari. He's not much for tradition and doesn't like being dragged to boring festivals by Meena or sent into the local forest by Guru Palan.

When he's not needed, he'll often be found in a corner playing games or taking selfies on his phone. Though Beenu is his best friend, the only time they are in competition is when they are vying for Lekha's attention. 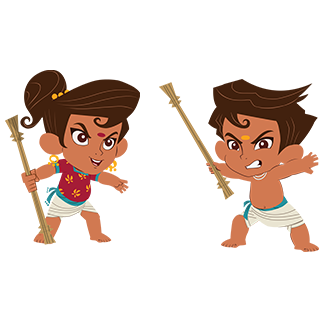 The youngest students of the Gurukul, Unni and Ami are mischievous little twins who are ready for anything that Guru Palan throws their way. They like mimicking others and can't help getting themselves into trouble. They're excellent in sparring and can predict each other's next move. They have a love hate relationship and end up fighting and making up all the time. 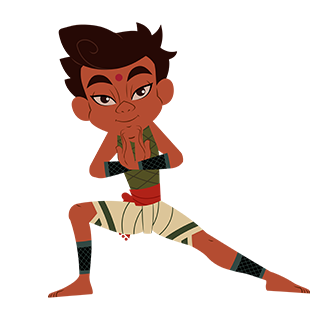 Beenu's contemporary and an equally skilled martial artist, Raaka is Guru Veta's protege and hence believes in all his ideologies. He never misses and opportunity to upstage Beenu whether it's competition or a backyard game. He's a real bully and uses his friends to get his work done. The only time Raaka shows any fear is when he is confronted with stories of the magical jungles. Even when Guru Veta tries to teach him to channelize magic through Kalari, his attempts go in vain as Raaka avoids any contact with magic and stories of the magic jungle. 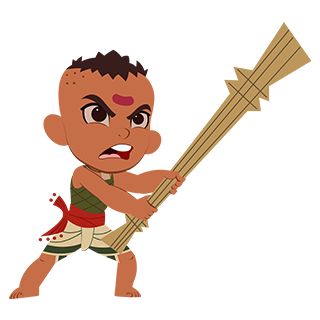 Mani is Guru Veta's only son and only follows his father out of duty to do so. But, he thinks most of his father's plans are silly and that Veta's quest to channelize the magic of the jungles is in vain. He deliberately messes up Veta's plans and likes to help the Kalari kids out when he can. Though young and small built, he is a formidable martial artist and his peers know he is no one to mess around with. 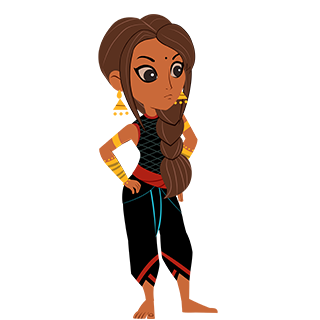 Lekha is a city girl and is the only girl studying at Guru Veta's gurukul. She is clever and likes to manipulate her opponent rather than actually putting her Kalari skills to use. Beenu and Shyam are enamored by her while Raaka only thinks of her as competition in Veta's gurukul. She only shows affection towards Mani and cuddles him like a puppy which irritates him. 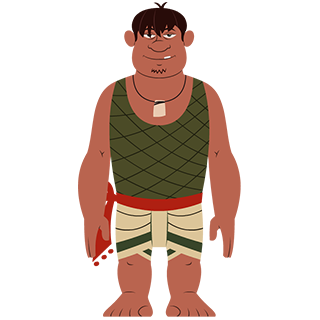 A huge brute of a kid, Langot tries to match his Kalari skills with his size but fails. All his years of training at Guru Veta's academy have only turned him into a confused and goofy kid. His size and lack of flexibility limits him in his skills. He has an unreal fear of Guru Veta and cannot even complete a sentence in his presence. He uses minimal words and giggles when he's happy. He doesn't have a mind of his own and depends on Veta or Raaka to give him instructions. 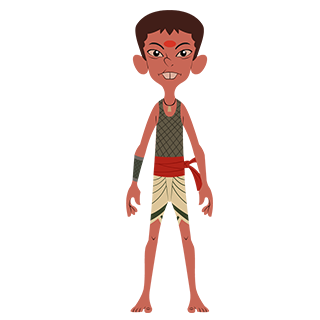 Raaka's sidekick, Dhaana isn't the smartest kid in school but is faithful to Raaka and follws him everywhere. He backs him up on everything but that's because he can't seem to think on his own. He tries to emulate Raaka and bully other kids but often ends up making a fool of himself in the process. 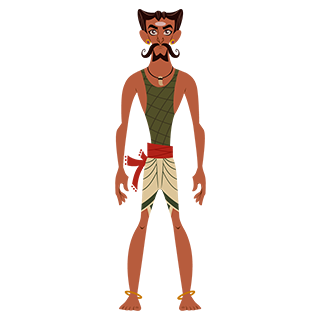 A powerful but egotistical practitioner, Guru Veta runs a gurukul down the street from his brother. He's got an ego as big as the city and believes he should be the greatest Kalari master of all the lands. But to do that, he needs to master the art of channelizing magic from the jungles for a good cause. He fails in every attempt to do as he is hot headed and has no good bone in his body.

He things of his brother as his biggest competition in every aspect of life and suspects that their father gave Guru Palan some secret that enables him to channelize the magic better than Veta can. So Guru Veta has made it his objective to find out what secrets Palan holds.

As a Guru, he teaches his students to be competitive and pushes them beyond their boundaries. What's worse is that he teaches them to be vain and greedy like him and to use their Kalari skills to gain things by hook or crook! 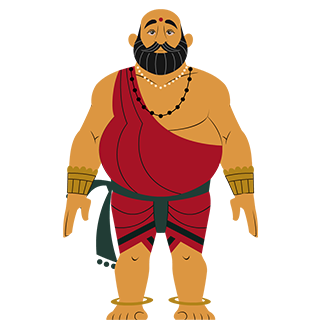 A Kalari expert and a wise man, Guru Palan is a father figure in his students' lives. He is loved and respected not just by his students but revered across the village of Kalaripuram. He believes the best way to teach his students is by focusing on strong traditional values and moral discipline along with the art of Kalari. He is as jovial as the kids around him and keeps everything light hearted. He sends his students on journeys of discovery as he believes in cognitive learning.

He is an intriguing storyteller and often tells legendary tales of his father to keep his students curious and eager to learn more.